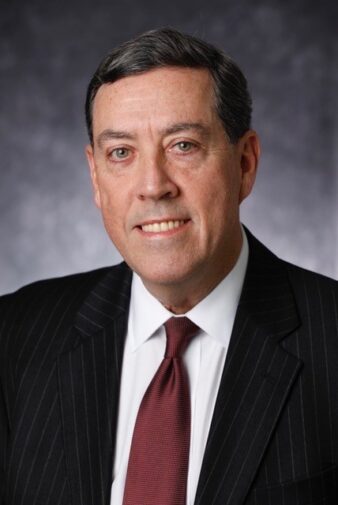 Mr. Meehan graduated from the United States Merchant Marine Academy with honors in 1976. After graduation, he sailed as Third, Second and Chief Officer aboard American Flag, oceangoing vessels. He earned his law degree at Boston University School of Law and joined the firm in 1984.

Mr. Meehan has more than 30 years experience handling all types of marine claims. He has developed a particular expertise in all types of marine casualties, and is well versed in casualty-related issues such as general average, limitation of liability, salvage and OPA 90 liabilities. Chambers USA notes that his ability to “handle major litigation sensibly and effectively” has elevated his reputation to such an extent that several commentators described him as the “best in the firm.” 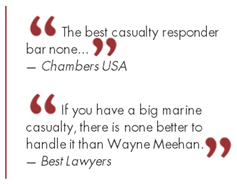 Chambers advises that, according to impressed clients, he is “the best casualty responder bar none” and he is “very good at managing major litigation, dealing with the authorities and maintaining an overview of the situation in different locations…” He is noted by Chambers for his “down-to-earth and quietly effective” approach and clients advise that he approaches cases with a “high level of energy” and has the ability to “rapidly grasp the important issues and what’s needed.” According to Chambers, “he is praised for his first-class knowledge of the ‘technical aspects of shipping’ and for his deep knowledge of the industry.”

Clients advise Best Lawyers that he “is reassuring, usually when all around are under stress,” and that, “if you have a big marine casualty, there is none better to handle it than Wayne Meehan.”

Mr. Meehan has extensive experience representing clients at U.S. Coast Guard and National Transportation Safety Board hearings. He has tried cases in Federal Court throughout the country and has handled various appeals to the United States Court of Appeals for the Second Circuit. In addition to litigation, Mr. Meehan has assisted clients in negotiating and drafting charter parties, contracts of affreightment, shipbuilding and ship repair contracts, and joint venture agreements.